CISCO, PART ONE OF A TALE OF ANIMAL RESCUE by Kenzie O’Hara 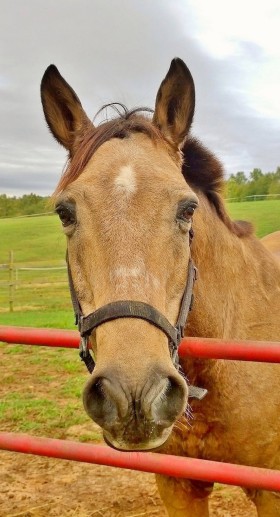 The quite flattering snapshot is me, Cisco. Half thoroughbred, half quarter horse, I’m known as an Appendix. Ebony mane and tail, and close to 16 hands high or 5 1/2 feet tall, I’m a dashing specimen of equine glory. 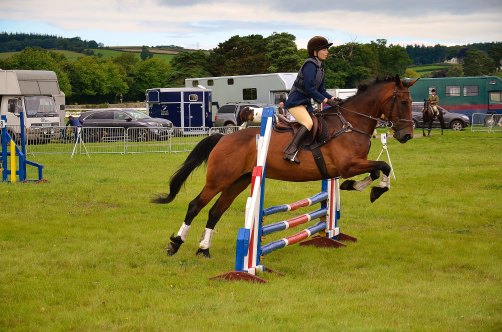 Outfitted in English tack, my first riders and I sailed over jumps and dashed through challenging patterns to meet the standards of refined dressage eventing. Not meeting everyone’s expectations, new horizons appeared. 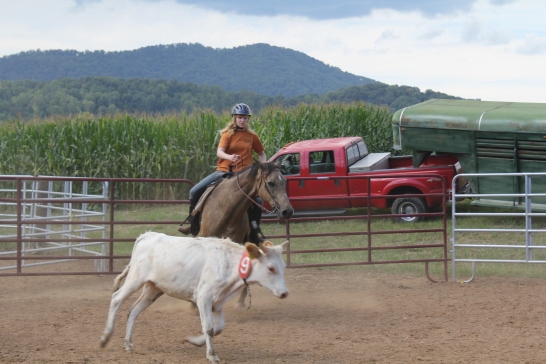 Next, Western gear and cow sorting. Here, the object was to separate a rambunctious heifer from the herd into a pen. Joints and muscles twisted, turned, and stopped with a brutal force that later caused arthritis.

Kids climbed aboard to take lessons, and I patiently accepted their inexperience.

Parade time, a groomer bathed and brushed every inch to perfection, and this gelding proudly entertained the noisy, bustling onlookers with nary a flinch.

Though a well-rounded steed, at nineteen, circumstances changed, and I found myself roaming an empty, quite mucky field next to a rundown barn.

No baths, no grooming, no one who cared, and the muddy ground infected my once sound hooves. Hmm, not liking this boring life much.

Profound sadness and lack of care turned this once proud fellow into an underweight, unsightly old man, and each day melted into the other. 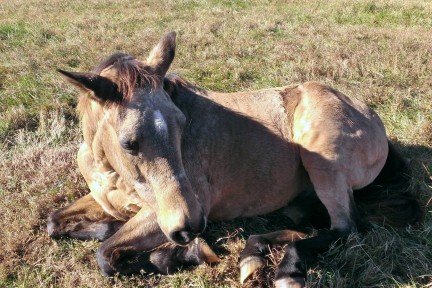 In search of a decent clump of grass, far-off chatter broke the near silence. Several women approached. Giggles and shrills trumpeted the air as their boots made great sucking noises rising and falling from and into the quicksand-like sludge that laid everywhere.

A halter and lead eased over my droopy head, and coaxing tugs guided toward a more stable ground. Unfamiliar hands caressed, eyes inspected, and soon came a saddle.

Ignored for so long, I admit, an attitude developed. Well, just because you’ve saddled me up, doesn’t mean I ‘m going to cooperate. Humph! I’m not moving. 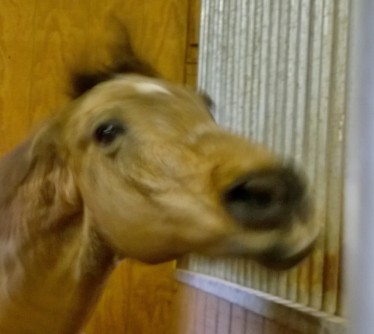 A petite cowgirl sat, drew up the reins, and forceful heels pressed my sides urging me to move. A few missteps as “the master”tried to direct one way, but I chose the opposite. Cooperate? As I shook my head no, I thought, Think again, woman.

After a lengthy discussion, between the humans, an excited voice pronounced, “He’s got soft eyes, he’s a been there done that kind of horse, and he’s the one.”

In a matter of minutes this undernourished, filthy, aging, uncooperative, out of shape guy found himself on a trailer bound for who knows where? Am I to be slaughtered for glue or meat? Is this the end?

The transporter came to a halt, the back opened. First one hoof, two, three, four, and what’s this, real solid dry turf? The handler, placed me in a hilly pasture, full of inviting grasses, trees, and a broad trough brimming with fresh water. My new home.

With piles of hay, grain, and an entirely adequate stall when the weather demanded, the nurturing treatment made my spirit soar. Every day, the same female visited, walked me with a rope, provided treats, and talked and sang non-stop. Truthfully, on occasion, the chatterbox drove me nuts. 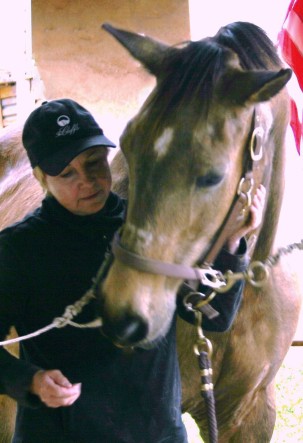 In three months, I gained 100 lbs., health returned, and one sunny morning, my lady/nutcase slid a cushy pad and handsome leather seat on my back. Off we went to the round-pen where we practiced daily.

At first, I refused to obey, but soon, I decided, she’s okay, and we began a beautiful dance of cooperation and trust.

About a month and a half later, we ventured to forested trails. Oh, my! New adventures, having a purpose, this is what being a horse is all about.

My owner rescued me from loneliness, boredom, ill-health, and a dastardly fate.

Not sure what this “love” thing she continually whispers in my ear means, but I look fantastic, move with ease, and I don’t want to give this person a hard time. Perhaps, this is love?

Happy trails to all, and to all a good day!