CISCO, PART TWO OF A TALE OF ANIMAL RESCUE, by Kenzie O’Hara 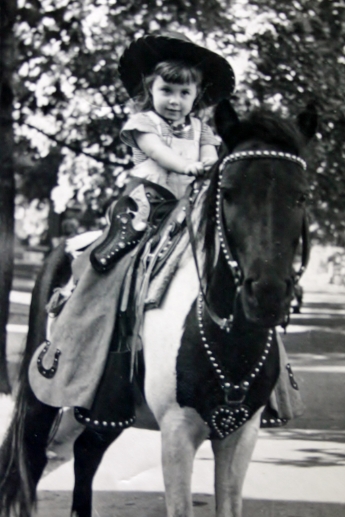 That’s me sitting atop an old man’s pony. Moments before, a clop, clop, clop echoed down the cement street.

No sooner did I ask, and the animal and man appeared. What a sight to behold.

The man shouted, “Who would like a picture on Hank?”

Immediately I searched Mother’s eyes, and amazingly she said, “Yes, you may.” Oh boy, my first encounter with a real live horsey and I stood motionless in anticipation, but inside, my nerves bustled. Inside, I jumped up and down like a batch of jumping beans.

“Hey kiddo, before I lift you up, let’s put this getup on you.”

In no time, I looked like a cowgirl with chaps, holster, guns, and hat. Next, the cowboy raised me up and plunked me on his companion, and in this instant, my infatuation with horses began.

Click, click went the camera, and in one swoop, my feet hit the ground. Noooo, I don’t want to get down.

“Absolutely not, your father wouldn’t hear of it, where would we put it, and who would care for it? No!”

Though a mere child, I understood and accepted the rejection, yet, this didn’t keep me from playing giddy-up throughout my childhood.

Years later, on one of my long treks through the city, I ventured to the outskirts and discovered a rundown stable. Did I die, and go to heaven? Several horses, roped to the rails, stood ready for riders.

An hour’s romp in the fields cost plenty, and my searches for empty bottles to redeem expanded, as did babysitting services. The efforts afforded me an occasional thrill of being horseback.

Ill-equipped, untrained, almost every outing presented a danger. “Whoa” and “dang” rang across the vast expanses, and ouches often happened, especially, when my leg rubbed the barbed-wire fence.

As a teenager, other things caught my attention, boys, but my love for equines never faltered.

Late in life, a friend re-introduced me to riding. Erroneously, I thought, How hard can this be? Little did I appreciate what time did to my out- of- shape body nor did I realize how little I honestly knew about the sport. 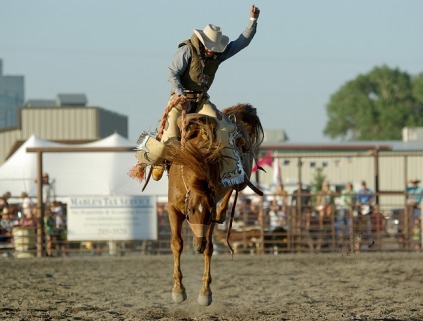 With no horse of my own, I rode other’s challenging beasties, and staying in the saddle was no small feat. One day, my luck went bye-bye. Off I went, and as I sailed face up, gazing at a gorgeous blue sky, I thought, Oh boy, this is going to hurt.

This picture of a rodeo cowboy is not me, but it depicts what I encountered perfectly.

BAM! My helmeted head, yes to wearing safety gear, bounced off a rock, as my back slammed the ground, and empty lungs cried for oxygen to expand them once more.

Broken ribs and tendons pulled from the bone, but no concussion. Several painful months ticked by, yet my enthusiasm for horses remained intact. Yeah, go ahead and call me nuts.

A newfound fear and mindset combined to make me think, Why not acquire my steed, one, to train, develop a mutual trust, and form a bond?

After a three-month-long Goldilocks-like quest to find the perfect partner, and not succeeding, my heart began to sink. An observant lady paired me with a woman who needed someone to take a tall, nineteen-year-old Appendix gelding off her hands.

The advanced age didn’t excite me, but oh heck, I’m old too, and I’ll take a look-see. Why not?

An hour later, ankle deep in muck, a dark, dirty figure ambled our way. “This is Cisco.” 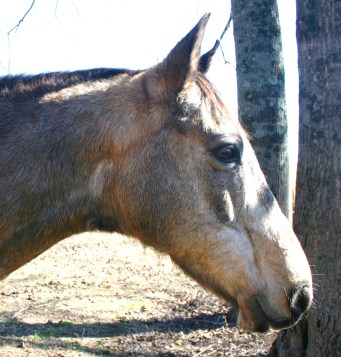 Words refused to be spoken, but inside, Oh my! Actually, Oh my dear God!

Frightfully underweight, his skeleton visible, head hanging in despair, and void of muscle tone, the sad appearance almost caused me to turn around and leave, but an unknown force kept me grounded.

Huge, soft-brown eyes peered into mine, as the desperate woman told stories of all his past accomplishments.

“This is the one, and I’m going to give him a chance.”

Thus, Cisco’s and my journey as buddies began. People expound on the virtues of rescuing him, but the truth is this turned into a mutual rescue mission.

To interact with this exquisite creature is incredible. With enormous size and strength, capable of ending my existence in a flash, the phenomenal brut chooses patience, cooperation, and does his best not to exact pain on my being.

Why does he allow me to put a halter, rope, blanket, and saddle on him? Why am I allowed to climb on his back and urge him into a walk, canter, and gallop? How is it when he’s startled, he keeps his wits about him, keeping me safe? These aren’t things he must do; they stem from his cooperation.

The rehabilitation process lasted months, but during this non-riding time we walked inviting pastures, and as he grazed, I sat talking and singing non-stop. It’s my belief Cry Me a River is his favorite. Then again, Zippity Doo Da pleased him too.

“Oh Cisco, I love you. My sweet baby angel and someone from above sent you to me. Such a handsome and well-behaved boy. No worries, because I’ll do everything possible for you.”

Yadda, yadda, yadda, as I talked a bright blue streak about everything and nothing. The constant chatter became boringly commonplace, and my boy most likely is sickened by my drivel.

Kisses land on his broad, twitchy nose and plump cheeks as I groom him before and after each meeting. The fellow adores belly rubs, and his neck-lengthens, nostrils twist, hilarious. 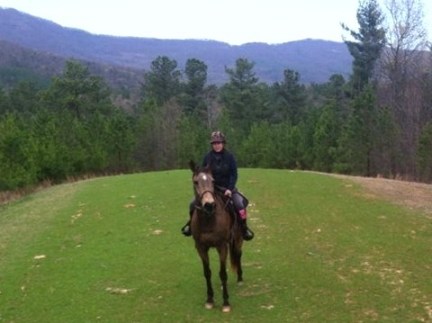 Regrettably, our days of cantering over happy trails, meandering along large grassy knolls, and galloping up steep hills are gone. Severe arthritis dictated Cisco’s retirement, and now he is living out his remarkable life amid two equine friends and abundant green grasses.

I wonder if he misses my endless conversation and melodies?  Mm, I doubt it.

If you’ve had the blessing of horsemanship and have a tale or two to share, please feel free to comment, and happy trails to all, horsey people or not.