ROOMS OF TERROR by KENZIE O’HARA. A view into child abuse and domestic violence.

The prior excerpt from A Good Little Girl described one of my cherished hiding spots, behind the locked door of the bathroom.  Below are descriptions of two additional areas in our unharmonious bungalow. 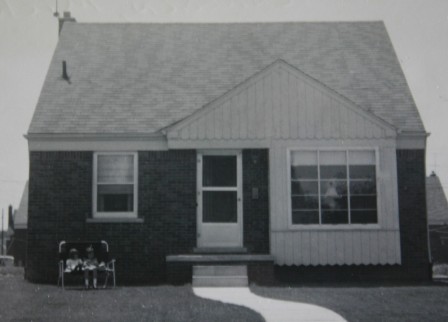 Each provide a glimpse into a dysfunctional world that fashioned a fear-ridden child who quaked in her shoes, bit her nails to the quick, gnawed on her hair, and did her best to exist with an endless stream of nerve-racking stress.

Every room on the main floor opened into a teensy, square hall, and should we all come out of our bedrooms at the same moment, we would be standing not three feet apart.

Many a confrontation transpired in this small location, comparable to a pugilist fighting arena. One event began when an argument started, and my father lashed out at my mother. First, he pushed and slapped. Next, his fists came down on her, and she stooped to the ground in an attempt to ward off the blows. My usual unspeaking mouth opened. “Stop! Stop!”

My sister came flying down the stairwell. A second of silence, as we all stood peering into one another’s faces. In the next instant, my father dashed into his room, came back with a gun, and grabbed Katie’s hand, into which he shoved the weapon. “Go ahead, kill me.”

Is she going to pull the trigger?

My terrified mother snatched the pistol from Katie, the violent scene turned silent, and we retreated to our separate rooms. In my little safe closet, I collapsed into the dark, my thumb tucked into my mouth, holding tight to my blankie, as tears streamed down my face. Not the first time I hid here, and it wouldn’t be the last.

Funny how something as simple as a description of your childhood home can bring on a flood of memories, and many unhappy ones, but this is how my story unfolds. Most acts of my play are dramatic and painful.

A small space, and when we all sat for dinner, maximum capacity would be reached, yet Mom wrangled a birdcage into the corner. Allowed to fly loose, our little parakeet, Echo, perched on Dad’s can of evaporated milk, and our lovely puff of feathers put on a show in the mirror like lid. The first time, I expected my father to go into conniptions, but to my astonishment, he didn’t. Is he smiling? An aura of happiness on his face would be a rarity, except in public.

On occasion, the errant little creature relieved himself, and his droppings slid down the side of the can. “Get that goddamn filthy thing out of here.” Confined to his cage, my lime-green friend emitted melodious vocalizations, and this too became an irritant worthy of punishment. Now, a towel covered the wire prison, and the bird would be treated in much the same way as my sister and I, expected to stay hidden from sight and to be soundless.

Like most kitchens, ours offered a place where Thanksgiving turkey and subsequent re-creations thereof produced incredible olfactory and savory delights. The average diet was some form of well-done hamburger charred to the consistency of coal and hard as nails. My dad demanded everything be overcooked, including his toast. A meat-potatoes-and-food-from-a-can man, he also ingested loads of candy and ice cream. Hooked on sweets, this would be a constant source of caloric intake.

Culinary creativity would be pointless, as my ungrateful father tossed any creative concoction to the floor. “What’s this shit?” Though the mess resulted from his mania, restoring everything to pristine orderliness fell on my mother. This easy-to-anger man also possessed a thing about tableware, which needed to be white and without a pattern. The blank, colorless surface accentuated any uncleanliness that didn’t meet his demanding standards.

With attentive care, I washed the dishes by hand, but every so often, one that Dad found unacceptable reached his discerning eye. “Son of a bitch, Kenzie. A clean bowl now.” With the offensive dinnerware in hand, apologizing as I provided the newly rewashed dish, I knew this wouldn’t be the end of it. “Well, my appetite is gone now.” The anger boiled, and as he let out a disgruntled huff, he shoved the sparkling, immaculate plate away, and then pushed his chair from the table. Next, he left the house with a door slam capable of awakening the entire neighborhood. In true passive-aggressive style, as an adult, I purchase colorful, patterned table settings. My, my, a fractional display of rebellion from the good little girl, eh?

The food I found unappealing, I balked at, and this threw my mother into tirades on the plight of less-fortunate kids. “What about all the poor children in China who are starving? Now eat!” Like guilt would make me consume the distasteful fare. Without the least smidgeon of shame, dispatched to my room with an empty stomach, I would muse, I’ll be happy to ship my crappy eats to those needy babes, and they are welcome to every disgusting bit.

The steady work ethic my father exhibited appeared to be alive and well, but our table lay barren more than once, which might suggest his job wouldn’t be as consistent as portrayed. Financial circumstances must be the reason for the absence of groceries. For Dad to withhold food out of sheer meanness would be an unpleasant thought.

Bare cupboards translated into desperate situations, and Mom resorted to mixing boiling water and ketchup. “The soup is ready.” Not the most pleasant of meals, but the rumblings in the tummy stopped for a little while. Sometimes, a handful of crackers or a slice of bread sat at the edge of the bowl.

For now, hunger satisfied, all would be well with the world once more, but the man of the house didn’t partake of this meal, and most likely satiated his growling gut elsewhere.

Note:  The book does not contain photographs.